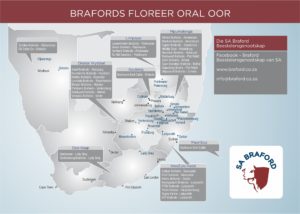 As early as 1946 the Braford breed (cross between Hereford and Brahman), like most synthetic breeds, was born of necessity to consistently and efficiently produce a uniform quality product in challenging production environments in both Australia and United States of America. In 1962 and 1969 respectively, the Australian Braford Society and The International Braford Association (USA) were formed to represent Braford cattle breeders in those two countries.

During the mid 1970’s the SA Braford was indepently developed by two visionary cattleman: Flip de Jager from Ladysmith, KZN and Naudé Bremer from Rosendal, Orange Free State. Both used registered Hereford and Brahman animals, in sound breeding programs, so as to breed the SA Braford. This was in keeping with a world wide animal breeding endeavor, where the good characteristics of two breeds are combined to produce a new or synthetic breed which is more productive than either of the original breeds.

The Hereford, which was used as the basis for the cross, was used for the following reasons:
in terms of numbers, one of the most popular beef breeds in the world; both under intensive and extensive conditions, and characteristics such as fertility and meat quality are associated with the breed. Add to this the longevity and outstanding mothering ability of the Brahman and you could have an animal with exceptional characteristics.

During the 1980’s John Park, Johan Meaker, Walter Thiële and Wessel Wessels also participated in the early development of the SA Braford. On 30 May 1997 the SA Braford Breeders Society was registered as a developing breed with SA Stud Book.

The SA Braford is especially known for its early to medium maturity. Or, put in another way, heifers reach puberty at a younger age while steers on grass, or in a feedlot, finish quicker and with less food. This characteristic, as well as the breed’s exceptional feed conversion ability, results in great financial benefit for the feeder.

The SA Braford Breed Society is the seventh member of the World Braford Confederation which is made up of Australia, America, Argentina, Uruguay, Brazil and Paraguay. From this, one can deduct that the Braford is widely adapted, with climatic conditions ranging from semi desert to sub tropical.